During a soccer match between Arsenal de Sarandi and San Lorenzo, a dog suddenly ran into the sports field and brought the game to a halt after just 30 minutes from the start of play. The stray pup was being playful and wanted to indulge in a fetch game with the players. With the crowd applauding the pooch as she ran, why won’t she want to keep on playing? And, it appeared that she was quite a good runner.

Enjoying her joy-filled moments as she continued to play with the ball, the pooch still did not back out from the playing area when some of the players ran after her. However, there was not much interference by the management as the crowd seemed to love the little scene. And just with that bit of play, the little pup made it to the list of one of the cutest moments of football history.

The pup’s instant fame also got her an interview with a TyC Sports reporter, which ultimately turned again into a game of fetch as the dog started to play with the microphone. 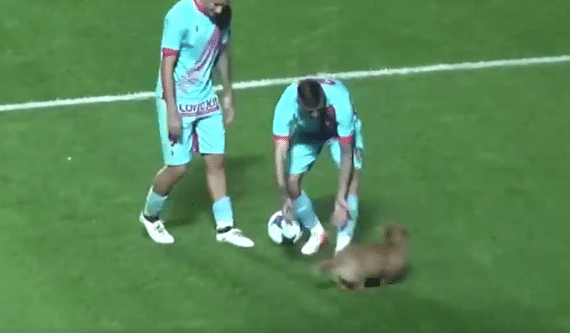 Luckily, for this adorable stray, the fantastic night did not end there as she later got adopted by the groundskeeper who wanted to use the pooch to keep away the birds from feeding on the grass seeds.

This stray canine certainly won’t be lonely anymore and will always have many people to play with as she keeps on working with her other dog friends owned by the groundskeeper. It looks like she got a job and a family all on the same night. It’s like killing two birds with one stone. With her enthusiastic personality and lively nature, she will surely be a good addition to the groundkeeper’s collection of dogs.

We hope that the soccer-loving canine finds all the love and support from her new family.

Image source: Screenshot from a video via Tyc Sports

Merrick is one sweet pooch who lived more than five …

Woman pretends her Grandmothers dog is her baby to sneak …

Hello, I am a hard working passionate person that loves life and all it offers. I love to share stories about dogs and educate their owners, I have watched dogs change lives and offer companionship. I am a mother, Grandmother and enjoy a full life with my husband. I work in health care and love to empower people to work for their dreams.

Our website is made possible by displaying online advertisements to our visitors. Please consider supporting us by disabling your ad blocker.