Memories and emotions associated with fragments of the past stay in a dog’s heart and mind. Humans are not the only ones who have that capability.

In this video uploaded by You Should Know that we are featuring today, viewers are completely baffled by the title posed by the said clip. What could the dog have been thinking and doing when he just sits there staring and watching his owner sleep? At first, it looked scary because it was like something paranormal was happening to the dog. 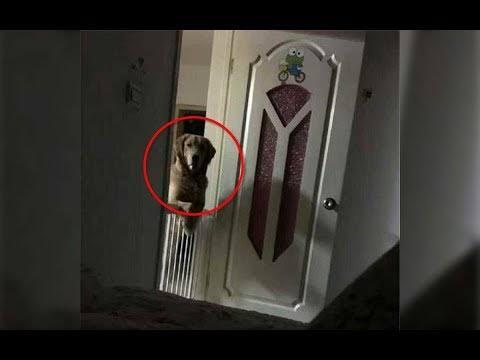 Screengrab from You Should Know

The man had already guarded his bedroom door with a short baby gate, but the dog, shown as a screenshot in the clips, would just stay there and seemingly watch his owner fall asleep. This Golden Retriever was just adopted by a Chinese man from an animal shelter. To satisfy his curiosity about his new pet’s strange habit, he went back to the shelter to shed light on this mystery.

It turned out that the golden retriever’s previous owner tacitly brought him out of their home and drove him to the animal shelter while the dog was asleep all the way. It was because they could not afford to take care of the poor dog anymore now that a baby was on the way. Traumatic for a non-suspecting dog, right?

The new owner decided to take the dog to the vet to find out the there was nothing wrong with the beautiful dog. The Vet shared how dogs like humans have emotional baggage as well. This was just a fear the dog held onto thinking if he stayed awake all night he would not be taken away to a shelter.

Upon hearing this, the new owner decided to remove the small gate of his bedroom door to finally let the golden retriever sleep with him every night from then on.

It’s definitely heart-wrenching, but at least, the dog has gotten a new owner and indeed a much better sense of peace and security in his new home and new family.

Does your adopted dog have some strange habits too? Share it with us!

Merrick is one sweet pooch who lived more than five …

Hello, I am a hard working passionate person that loves life and all it offers. I love to share stories about dogs and educate their owners, I have watched dogs change lives and offer companionship. I am a mother, Grandmother and enjoy a full life with my husband. I work in health care and love to empower people to work for their dreams.

Our website is made possible by displaying online advertisements to our visitors. Please consider supporting us by disabling your ad blocker.